No Foreign Service or Uruguay info in this long overdue update.  Simply a dad who likes to listen to his little girl's voice.  What can I say?  The girl likes to sing...


Next, we have an original piece.  This is a song about rain jackets, because sometimes it rains outside.

And finally, a holiday jingle.  Her personal favorite.


No audio, but instrumentals will come soon. 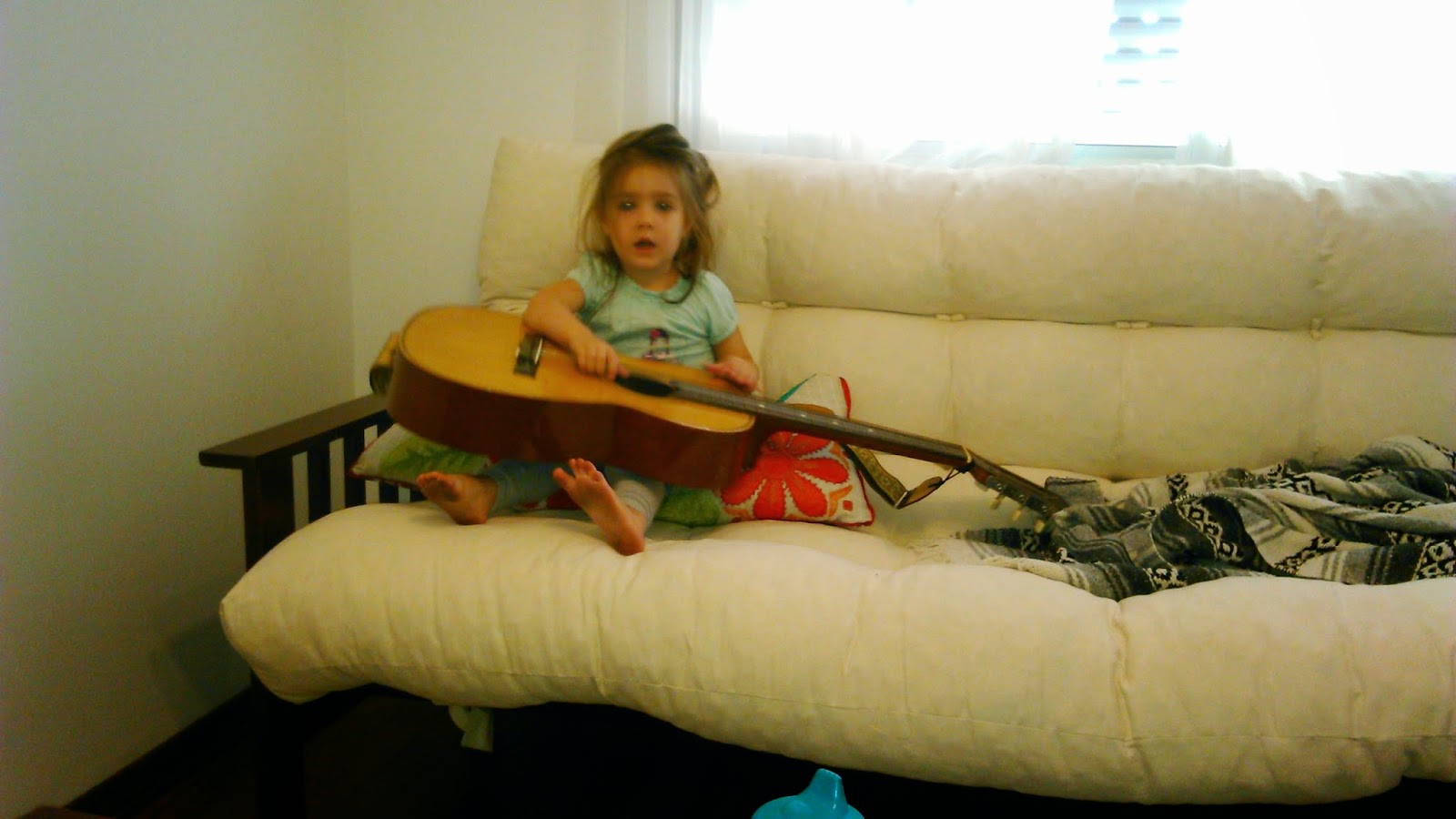 Time to update the ol' blog for posterity and to keep the fans satisfied. (Hi you two!) It's now September in "The Uruguay," as they sometimes say. The mythical and mystical "Santa Rosa wind" (an exceptionally windy storm that traditionally hits in the last week of August) came and went, signaling the coming spring. But I don't feel like winter ever began. If it did, winter in the southern hemisphere is a pleasure. It was shorts-weather ten days ago. We've been eating ice cream in Buenos Aires and shopping for flowers at the farmers market. 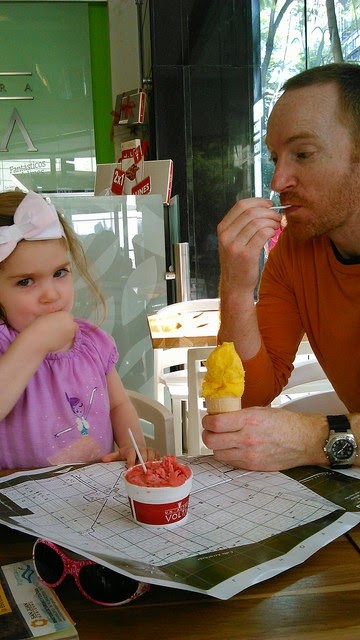 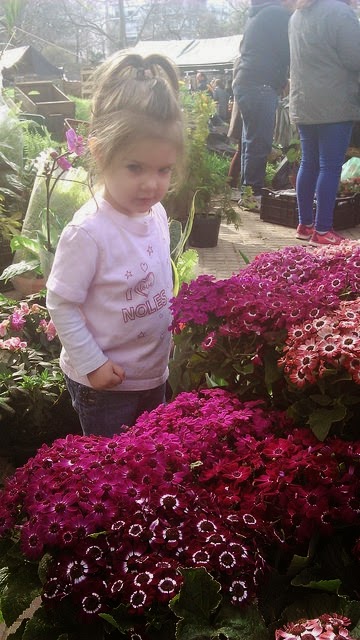 And we've been climbing outdoors at our personal playground down the street. I'd complain about the height of the routes, but the rock is solid (a bonus in climbing), the routes are challenging and it's a short walk from home. The ducks and geese add charm and entertainment for a two-year old who gets tired of cheering her old parents up the walls. 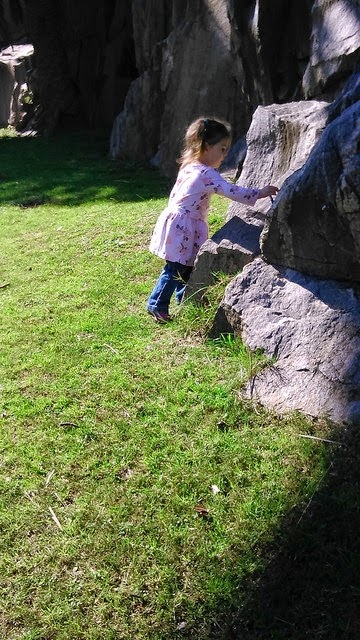 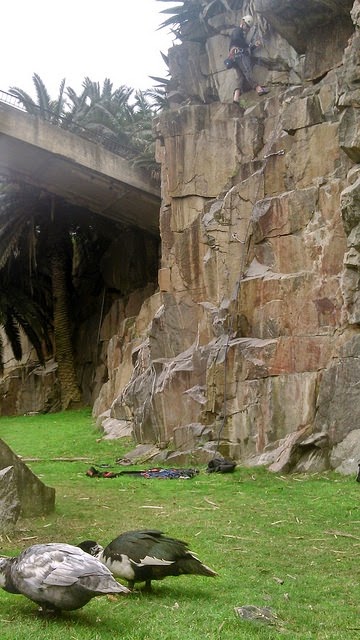 World Cup fever is sweeping Uruguay. Or at least it was until their star player, Luis Suarez, again bit an opponent on the field. Not sure what ailment he's infected with. I think Ryan's caught it too.

Alas, FIFA suspended Suarez for nine games and Uruguay, without their dangerous and hungry star, promptly lost in the knockout stage. President Mujica weighed in as well, calling FIFA officials a gang of bastards. Pretty normal commentary from El Presidente. The U.S. is also gone, though they made it through the "group of death," something to be proud of. The World Cup certainly affects daily life here. You can hear screams of joy and groans of agony from surrounding apartments. Streets are eerily quiet during big matches, in particular those featuring (obviously) Uruguay, but also Argentina and Brazil, who have both advanced to the semis. Our embassy broadcasts the Uruguay and U.S. games on a big screen, and makes all games available on office computers. It's been a lot of fun and we'll miss it when it's over. Viva el futbol!
Posted by Keith at 6:30 AM 0 comments

Shortbus is sleeping so I'm going to quickly post a review of the last eight months since we went off line. I enjoy many aspects of the foreign service lifestyle: travel, immersion in foreign cultures, new languages, different foods, etc. But one big drawback is "PCS," or permanent change of station; i.e. the process of moving from one post to another. We move every two to three years. And this isn't a UHaul across town. It includes staged packing of belongings we'll need in carry-on and checked luggage, stuff we'll get in a few weeks ("unaccompanied air baggage"), and the rest of our "household effects" which me don't see again for months. It's like planning a phased military invasion. A mentor once told me he and his wife simply agreed not to talk during pack-out. He was joking. I think. It's a stressful time. It hasn't been that bad, but that's probably because Elyse does all the logistics and planning.

Anyway, that is my long excuse as to why we haven't posted for so long. First we had to say good by to our wonderful friends and enjoyable life in Kathmandu. That was in August, 2013. What a great first tour. Nepal is an amazing country and professionally it was a fun and rewarding job. I couldn't have asked for a better consular tour or better co-workers. It was Ryan's first real home, where she learned to walk, do "prayer hands" and say "namaste." And due to certain privations that come with the territory, Elyse can now bake various breads, brew an array of beers, make several cheeses and even whip up some big, soft pretzels if I get a hankering. And before we knew it, the two years had passed. Pheri betaula (see you later) Nepal.

We moved back to DC for six months of training. Elyse and I learned Spanish. Ryan hung out at a bacteria factory called day care. Before we knew it, it was March and time to move again. But first...a mandated "home leave" where we must reacquaint ourselves with the US of A. (How else could I credibly represent Amurka while overseas? Never mind we'd been living there for half a year.) We made the most of it and visited family and friends in New Jersey, New York, Idaho, Florida, Washington, Oregon and California. We saw the last three states from the comfort of an RV as we drove from Seattle to San Fran and "camped" in some of the country's greatest parks. (If you haven't yet, go to the Red Woods.) Then it was back across the country to Florida. Ryan's 20th flight (or so) by the age of two. A few more days with family and we were off to our new home: Montevideo, Uruguay. And here we are. Post number two. Seems great so far. Ocean breezes, sunset views and lots of good wine and beef. We'll make it somehow.
Posted by Keith at 6:12 AM 0 comments

This is Shortbus. I'm a cat. And I'm in charge now. The blog title Serenity Now was lame, so I changed it. Deal. I am originally from Cape Verde. I now live in Uruguay. Before this I lived in Kathmandu (no lame puns). Remember how I conquered it? No? Read here. Those were good times. Besides my life abroad, I've also stray cat-strutted around Florida, Georgia, Rhode Island and Washington DC. You could say I'm a rambling cat. I've been around. In my spare time I do a little math and physics. I'm working with some Cartan matrices right now. Anyway, it's about time I get my dues. So here you are. Enjoy. Now I'm off to conquer the Spanish language. In Uruguay the cats say "miau." Weird.

Email ThisBlogThis!Share to TwitterShare to FacebookShare to Pinterest
Older Posts Home
Subscribe to: Posts (Atom)
Shortbus Conquers the World documents the life and adventures of a U.S. Foreign Service couple on their first tour in Kathmandu, Nepal. No story too inconsequential, no insight too random is spared treatment on Shortbus Conquers the World. Even their two "diplocats" share a wise word or two when the mood strikes. Follow along to see what happens next.

DISCLAIMER: This blog is intended to give a personal insight into life in the U.S. Foreign Service. It is not associated in any way with the U.S. Department of State. The views expressed here are our own and do not necessarily reflect those of U.S. government or any of its agencies/departments.